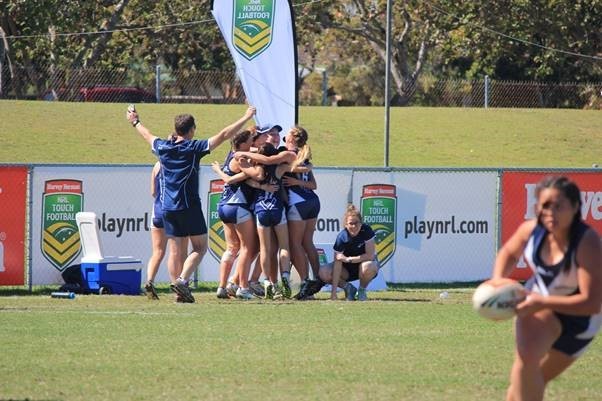 I hope you’ve had a fabulous start to Spring and are now enjoying being active and outdoors in the sunshine again!  It’s been a busy month here at My Trainer (nothing new there) and on top of my usual business & family responsibilities I had a week in WA to factor in.  With my habits of multitasking and lifelong learning, I used it as an opportunity to observe and ponder the world of sporting success, read on to learn what I discovered…
What I learnt from watching kids elite sport for 5 days straight.
Over the last week I have been privileged to attend the National Schools Touch Football Championships in WA as a parent helper for TeamVic.  At that event I have seen some amazing talent on show, the highs and lows of competitive sport and a range of different coaching & parenting styles.  I learnt & observed many lessons from the sidelines, but the most important ones I took away from it all were…

As the best in their various states lined up to face off in the matches of skill, speed & fitness, I realised that no amount of individual talent would overcome the incredible preparation of the dominant teams (all from QLD).  Starting from the moment the coach and support staff were chosen, then the trial and selection of the players, every last detail was agonised over, planned and prepared to achieve success.  The individual skills of the players were honed and moulded to the perfect fit with each other, to achieve a seamless and flexible mix of athletic performance.  The success of the team didn’t rest on the shoulders of 1 or 2 key players, but the success of the individuals rested on the shoulders of their team.

In comparison the teams who failed to prepare as well for the challenge, were unable to convert their talented players into success for the team, and the kids were left wondering what might have been.

“Resilience is a lifelong skill”

Over the week, each team played every other state to earn their place on the final ladder.  Coaches, managers, parents & kids alike were faced with many challenges to their sense of self on a daily basis.  Competition sometimes brings out the best in people, the opposite is also true!  Coming off a massive loss (or win) in the morning and trying to back it up in the afternoon, takes a strong sense of self awareness and emotional intelligence.  The kids (some as young as 10) showed us all on the sideline, that winning isn’t everything, doing your best regardless of the score is it’s own reward, and every new match or day was an opportunity to learn, improve, make friends and have fun.

“Live with no regrets”

One of the fairytale stories of the tournament was the U15 girls team from Tassy.  As competition underdogs they weren’t expected to do much.  But they had determination and courage like I’ve not witnessed before.  These girls left it all out on the field and fought their way up the ladder against the odds.  In one of the matches I saw, they literally threw themselves at everything they could to take the win in overtime and play again the next day in sudden death.  They walked away from the tournament victorious, and they’ll remember that moment for the rest of their lives.

If all of us managed to remember just those 3 things in life, I think we’d all be happier and more successful in all our endeavours.